While visiting Alaska I had planned on checking out the various Masonic temples in the cities we visited across the state.  We had a very full schedule planned for the 10 days we planned to be in the state so I wouldn’t be able to explore Alaskan Freemasonry as much as I would have like to or to the extent it deserves to be featured.

On our first day, we left Anchorage for the coastal town of Seward. The town’s economy is primarily based on tourism and fishing.  There are also a few museums and a historical downtown with plenty of shopping and restaurants.  It is easy to fall in love with the laid-back atmosphere of the city.

As we were checking into our hotel I happened to look to my right as I was removing the luggage from our car.  Just a few blocks down was this beautiful chapel sitting on a hill, behind it was a mountain and some tall, lush trees.  It was like a picture postcard brought to life.  After admiring the scene for a few seconds.  Then, I went about removing the luggage.

Each time I walked out of our acclimations this little chapel caught my eye.  I decided before I left Seward, I would have to get a closer look at this beauty.  I snapped a photo, trying to capture the beauty of this scene with just my meager smartphone but the results were good but paled in comparison to actually being there.

Finally, one afternoon I had a bit of free time and decided I would use my leisure time to find the Masonic lodge building in Seward.  As a reference, I checked the Grand Lodge of Alaska’s website and I seen Seward Lodge #6 doesn’t actually have its own Masonic temple.  They meet in a church building.  The lodge meets two Saturdays each month at St. Peter’s Episcopal Church in Seward.  After consulting Google maps, I find that St.  Peter’s is the cute little chapel on the hill!

Seward lodge met in several places during its lifetime in this fishing village.  From 1916-1921 the lodge shared a lodge room with the local Oddfellows lodge on the third floor of the local hotel.  In 1921 they moved to the second floor of an office building until the 1960s when they built a building of their own.  I couldn’t find documentation on the web which explained when and why they moved from their building and began meeting in the church.

St. Peter’s Episcopal Church, which is listed on the National Register of Historic Places, was built in 106.  In 1908 the church was completed.  In 1925 a Dutch Artist Jan Van Emple pained a reredos of Christ’s Resurrection which according to the church’s website says “The $650 cost was raised by popular subscription. This unique work depicts the Ascension as well as the Resurrection of our Lord. The empty tomb is shown against the background of Resurrection Bay (In Seward). Instead of apostles, the painting includes people of Alaska–Indian, Eskimo, trapper, prospector (a self-portrait of Van Emple), and homesteader, underscoring the Church’s teaching to “preach peace to them that are far off and to them that are nigh.” The angels on either side of the Lord are portraits of Van Emple’s two sisters.” 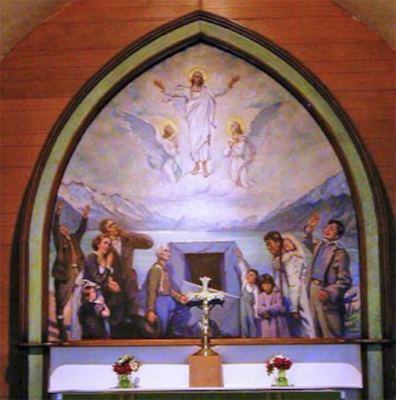 I wish I would have had the opportunity to see the interior of the building in person or visit the brethren of Seward Lodge.  I hope someday soon I will be able to revisit and spread cement with the brethren of the lodge.

I’m sure the members of the lodge are proud of their lodge’s unique history and the beautiful building they are fortunate enough to meet in.  I am also sure they feel lucky to reside in such a quiet, beautiful little seaside village on America’s last frontier.